I had not planned to post yet another medical update, nor do I really like having information to share that constitutes a medical update; however, such is the existence of those of us living with Metastatic Breast Cancer (MBC).

Last week, as Elliot and I were preparing to head to Orlando on Sunday to assist his father in settling into a new nursing home, I didn’t feel well. It was a migraine, complete with nausea, light and sound sensitivities and generally yuckiness. I tried to go, I really did, but that just didn’t happen.

Sunday afternoon was when I started vomiting. It may be TMI, but that was the beginning of nearly four (4) days of intractable vomiting. That’s literally the medical term for can’t stop vomiting, throwing up everything, misery to the nth degree. Fancy, right?

The reality of it is, it sucks.

Following my doctor’s advice, on Monday we went to urgent care where I got fluids and medication. That worked for about 6 hours. We went back to urgent care the next day, following my doctor’s instructions, where I received fluids and medication, plus they did a urinalysis and bloodwork. Looked like I had a UTI, so this time I left with antibiotics, which I immediately threw up after taking them.

By this time, it was pretty late on Tuesday night. There was a certain amount of desperation that had been building. I had had some body aches, but now it felt as if my entire body was on fire. I couldn’t keep down any pain medication so that didn’t help. I fished out my vape pen from when I’d first been diagnosed that I only use for break through pain and I vaped, A LOT. Once I’d nearly emptied the cartridge (hard to do, but I was DESPERATE to sleep), I was able to sleep for a few hours. As an aside, I’ve never been that high before and it was a glorious feeling for a few hours — my body didn’t hurt and I could finally relax.

My sweet husband was up with me nearly the whole night. It hurt so much to vomit that I would wail and cry each time I did. It was one of those marital moments that you can look back on and say, this, this is how I know he loves me.

When morning came, we decided to head to the ER. We’d had enough.

Once we arrived, we were brought back quickly and I got morphine really fast. Pretty sure they could see how bad I felt. Those 4 mg of morphine changed my life, literally. I could finally get comfortable for more than just a few hours. I got more anti nausea medication too. I could finally relax.

I’ll spare you the various potential diagnosis they tried on for size. Some of them were pretty scary. The cause of all this misery is still unknown for sure, but what we do know is that I showed up to the ER with metabolic acidosis.

Metabolic acidosis is a condition in which there is too much acid in the body fluids. It can also occur when the kidneys are not removing enough acid from the body. There are several types of metabolic acidosis.

Diabetic acidosis develops when acidic substances, known as ketone bodies, build up in the body. This most often occurs with uncontrolled type 1 diabetes. It is also called diabetic ketoacidosis and DKA.

Hyperchloremic acidosis results from excessive loss of sodium bicarbonate from the body. This can occur with severe diarrhea.

Lactic acidosis results from a buildup of lactic acid. It can be caused by:

• Medicines, such as salicylates

Other causes of metabolic acidosis include:

• Poisoning by aspirin, ethylene glycol (found in antifreeze), or methanol

Throughout the time I was in the hospital, there were questions about whether Piqray, the medication I take to manage the sneaky cancer boogers in my body, was to blame. While I am not diabetic in the traditional sense, Piqray causes hyperglycemia, which means I take Jardiance, a medication diabetics often take to manage their sugar. Jardiance assists with removing the excess glucose before it becomes insulin and that happens through the urine (TMI, again?). So, some of the diabetic complications do apply to me even though I’m not diabetic. Explaining that distinction is sometimes difficult and lots of medical people have argued with me, insisting that I do have diabetes. However, after my doctor consulted with Novartis, the manufacturer of Piqray, and consulted with others, including my new nephrologist, the conclusion is that Piqray is not to blame and I can stay on it. Woo-hoo.

The life of a metastatic breast cancer patient is not easy, but there are some bright spots to focus on if you try to find them.

For instance, my sister spent the first night at the hospital with me and when there was a nurse in training learning how to access ports who began to try to access mine, she got in her face and made her stop. She wasn’t about to let someone learning to stick me after all I’d been through. She’s my younger sister by 18 months and I’m pretty sure that was the first time she went all mama-bear on my behalf. Again, a moment where you can look back and say, this, this is how I know my sister loves me. She also made sure I had my phone charger and plugged my phone in whenever we could–soooooo key!! Amy is also an amazing photographer. She photographs natural beauty products and she brought a bag of stuff for me to hand out to the nurses. Head on over to Instagram and follow her @beautystealsinward for a myriad of ideas and knowledge about companies who are doing right by their employees, their customers and the environment! 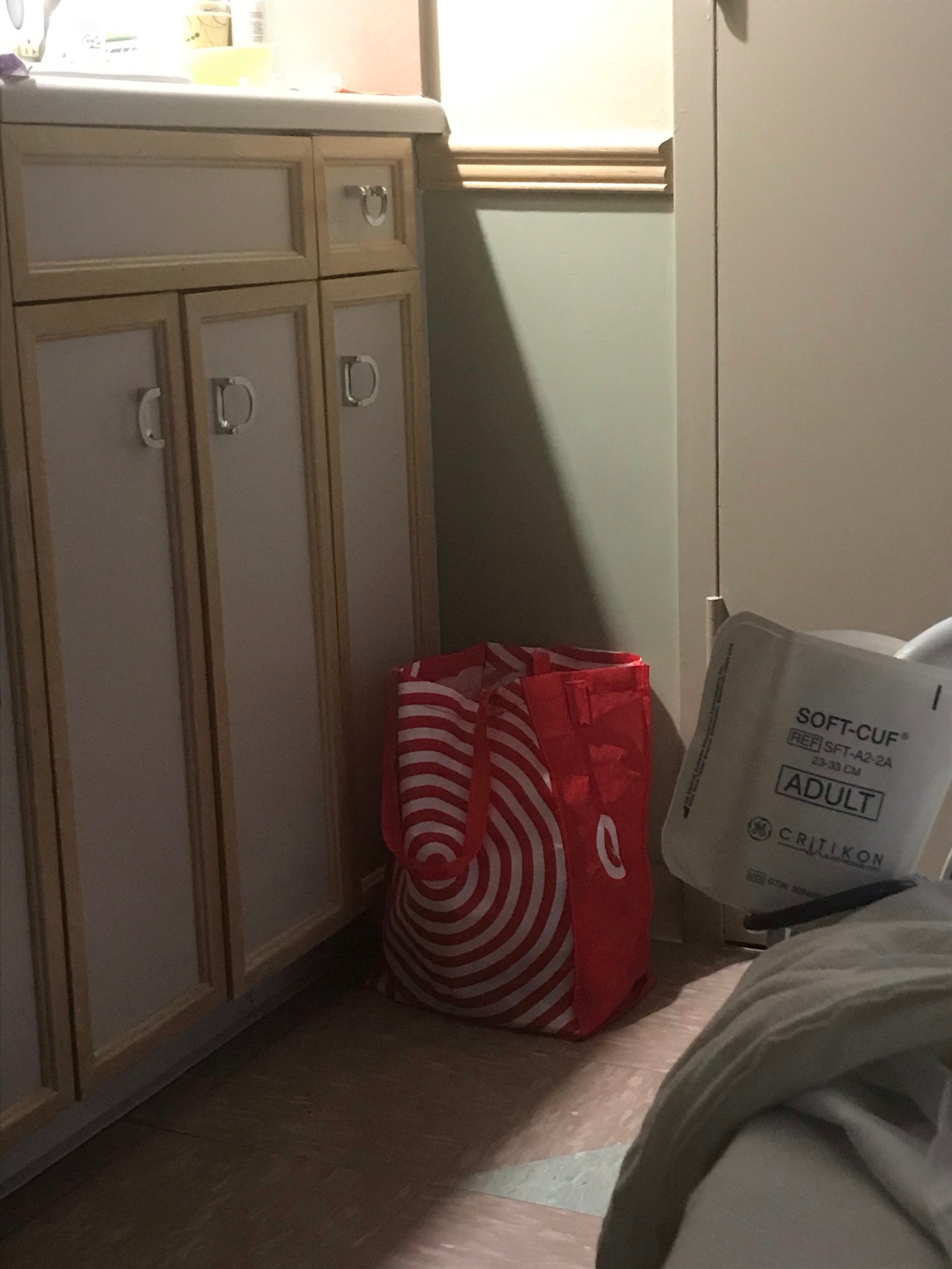 I’m so thankful for my family who stepped up in many ways to ensure that my boys got to school, did their homework, ate food, slept, etc. It’s a huge weight off my and Elliot’s shoulders to know they are cared for, loved, and we don’t have to worry, we can focus on my care. My mom, dad and sister went above and beyond for us and we’re forever grateful to them. I’m not always good about asking for help and when you visibly see the love in the actions in others, that’s when you really know you are loved.

I’m also thankful for all the friends who have checked in on me and have offered solutions and comfort and support. Reminders that we are not alone is huge when you are not feeling well. Nataly, in particular, spent much of the day with me one day and gave me these awesome socks with our picture on them!!! The nurses were very complimentary and I’ve given out the place she got them to a lot of people.

I’m thankful for my port and how that saves me from being stuck so often. One of the more experienced nurses gave me some sort of special needle in my port that allowed me to get the contrast for my Brain MRI in my port. Since I’ve lamented for the past two years that I didn’t know to ask for a power port back in 2017 when I got mine, that has made me so happy!! I now know it’s possible, so I’ll be asking for it. Fewer sticks the better!!

Before I end, I want to talk about one of the few panic attacks I’ve had during this whole cancer experience. On Friday, when I was originally supposed to go home, I woke up after a pretty rough night to yet another migraine and vomiting. I also had tingling in my feet and hands. Then, my hands stopped working. I literally couldn’t move my fingers and nearly dropped the bag of vomit all over myself. I think I was crying or maybe wailing, things are a bit blurry. The nurse got me medication quickly and I could relax and my fingers worked again. Since I’ve not been able to keep much of the Effexor I take down because of the vomiting, I’ve wondered if that played a role in how much anxiety I had. I also understand that the seizing up of my hands and the tingling was from a severe potassium deficiency.

Whatever the cause of my panic, I’m reminded of how powerful our minds are and how much control what we think has over our bodies. I’m not saying positive thinking is the cure all, just that what we are thinking or feeling does have an effect. That effect can be positive or negative. In that moment, when I couldn’t stop vomiting, I was in excruciating pain from my head, and my hands didn’t work, all I could say was … “something is wrong.” I kept repeating that over and over, almost like a mantra. The nurse tried to get me to calm down, by saying calm down (hint hint, not the best technique) but I just couldn’t. My rational mind was off line and all I could feel was panic.

Once the morphine hit my system, I was able calm down and my hands worked again. Once the physical symptoms dissipated, the feelings I had about those symptoms became manageable. Many of you who know me know that I’ve spent a lot of time and effort avoiding taking narcotics. I do want to make very very clear that I know there is a place for narcotics, there’s a time when they are appropriate. This was one of those times.

For everyone who stuck with me to the end of my saga, thanks! It was a long week for everyone and I’m so happy to be home.

I'm a daughter, a wife, a mother, and I've been living with Stage IV Metastatic Breast Cancer since March, 2017. All of the words I publish are my own. View all posts by Abigail Johnston

Health as a Human Right

I’m eating to live. Not eating for entertainment.

Life past, present, thoughts about the future, and ever changing world

Echoes of Life, Love and Laughter

Dear _____, I'll gie ye some advice, You'll tak it no uncivil: You shouldna paint at angels mair, But try and paint the devil.

A Day in the Brine

Unkempt Mind dribbling in the seethe

retired from work, not life